NSG Pilkington’s Rossford, Ohio, float plant traces the history of glassmaking in the U.S., with an eye toward innovation and change 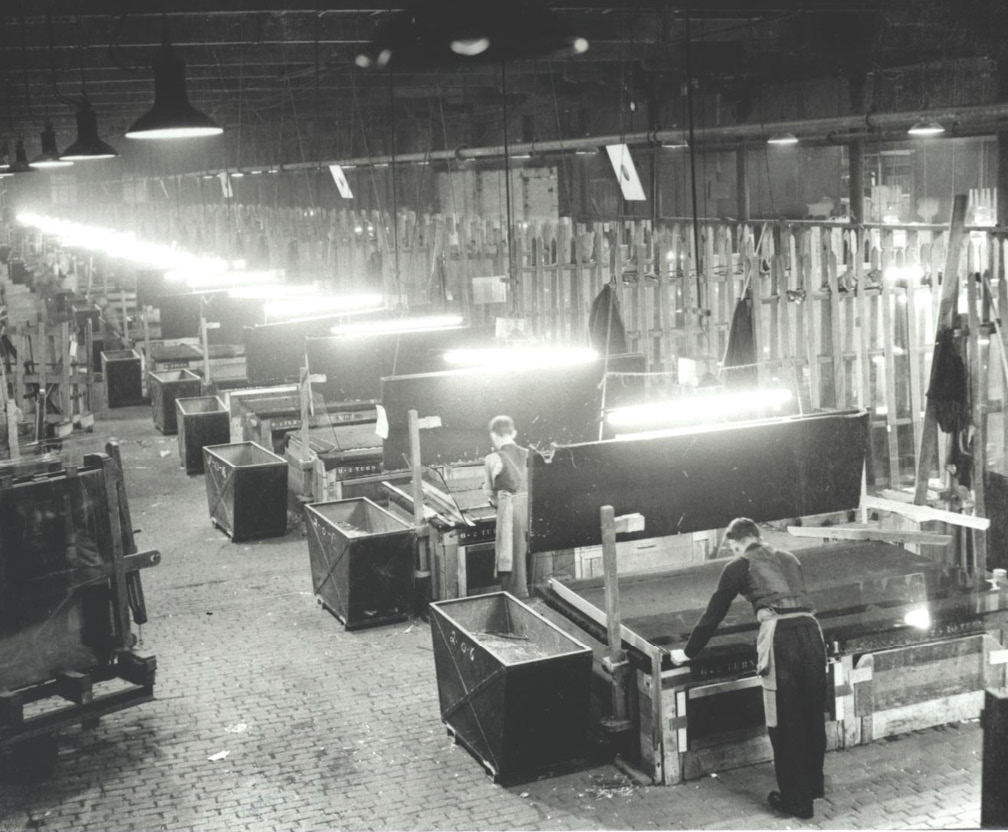 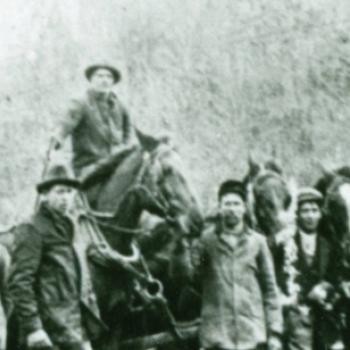 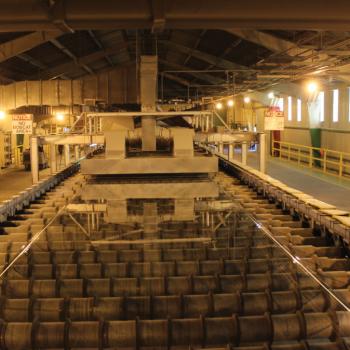 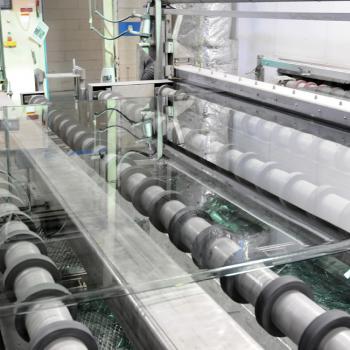 Photos above include historical images of  groundbreaking at the Rossford, Ohio, glass plant and workers polishing glass at individual cutting tables.

The pages of Glass Magazine often tell the stories of the ever-evolving and expanding possibilities of architectural glass. Glass can be jumbo, bent or dynamic. Glass can be clear, modern and minimalist; decorative, colorful and expressive. It is structural; it is protective. But no matter its final application, today’s architectural glass shares one common starting point: a 2,800-degree furnace and a bath of molten tin. These fiery beginnings are part of the enormous and energy-intensive float glass production process.

Today, more than 1 million tons of float glass are produced annually at over 450 plants around the world.

Manufacturers in the United States operate 24 plants with a total of 38 lines. This includes the historic NSG Pilkington float glass plant in Rossford, Ohio, situated on the banks of the Maumee River adjacent to Toledo “Glass City,” Ohio.

In August 2019, NSG Pilkington opened the doors of its Rossford plant to attendees of the National Glass Association’s Fall Conference. The 1.7-million-square-foot plant, with about 1 million square feet in use, includes two float glass lines, running 24/7. Visitors learned the long and rich history of the Rossford plant, which traces the advancements of glassmaking in the U.S. And they toured the plant’s current operations, which demonstrate the industry’s advancements over the decades.

Glass production began at Rossford in 1898, when entrepreneur and glassmaker Edward Ford established the Edward Ford Plate Glass Company on the 173-acre site. Ford introduced plate glass manufacturing to northeast Ohio and, in doing so, establishing the town of Rossford. (Rossford is named after Ford and his wife, Caroline Ross.)

“There was nothing here at that time—nothing but railroad tracks and a river,” says David Imbrogno, Rossford plant manager. “This facility had its own power plant, its own general store, all right here.”

The original Rossford plant produced glass in batches using individual furnaces, rather than through a continuous process. In batch plate glass manufacturing, raw materials for a single batch were melted in the furnace and the resulting molten glass was poured, or pulled, onto a large iron surface. The glass was then painstakingly polished on both sides.

It was a time- and labor-intensive process, says Kyle Sword, manager of business development for NSG Group. “A single piece of plate glass would take 8 hours to make. Seven workers would be at the cutting table, polishing the glass. The cost was tremendous.”

In the early decades of the 20th century, the plate glass process evolved. Manufacturers moved to rolled glass manufacturing, allowing them to abandon the smaller batch furnaces in favor of larger furnaces. Imbrogno estimates that the Rossford plant had between eight and 15 batch furnaces in the early decades of production, before moving to only three large furnaces.

Rolled glass manufacturing improved production efficiencies. It allowed glassmakers to better serve rising demand for glass in windscreens for the burgeoning automotive market and for windows in the skyscrapers popping up in cities across the U.S. The next major advancement in manufacturing wouldn't come until float glass was introduced decades later.

British engineer Sir Alastair Pilkington developed the modern float glass process in 1952. It marked a step change for the glass industry. With float manufacturing, companies moved to a continuous process that allowed them to produce more glass at a much higher quality with a fraction of the people.

Rossford was one of the first plants in the U.S. to move to float glass production, building its first line in the mid-1960s, says Imbrogno. At the plant, the early days of glassmaking required thousands of workers—10,000 at its peak, he says. Today, the plant employs 500, only half of whom are dedicated to the float process.

A float glass line is an impressive sight. It stretches more than 1,100 feet—roughly the length of three football fields. Production begins at the “hot end” of the line, where raw batch materials are loaded into the melting furnace. The batch consists of 60 percent sand, 20 percent lime dolomite, and 20 percent soda and sulfate.

The raw batch also features glass cullet—crushed and broken glass recycled from the finished end of the float line. The cullet further accelerates melting, reducing the amount of energy required up to 20 percent. The raw materials are melted in a large furnace, with temperatures of 2,800 degrees.

From the furnace, the molten glass enters a narrow channel before flowing into the tin bath, which is the critical component of Sir Alastair Pilkington’s game-changing innovation. In the tin bath, the molten glass floats atop about 2 inches of molten tin, like “oil on water,” says Sword. The glass spreads evenly across the surface of the tin. The absolute flatness and parallel nature of the upper and lower surfaces of the glass provide the high quality and clarity of float glass, which was impossible to achieve with the previous plate glass method.

Rollers pull the “ribbon” of glass through the bath. The speed of the rollers determines the thickness of the glass, with faster speeds producing thinner glass. Today’s modern float lines can produce glass in thicknesses of less than .3 millimeters for thin display glass up to 22 millimeters for heavy glass applications.

The ribbon of flat, pristine glass emerges from the bath and enters the annealing lehr, an 800-foot-long process in which the temperature of the glass cools dramatically, decreasing from 1,100 degrees to room temperature. After annealing, the glass is scored and cut to size before moving to the end of the line.

Float manufacturing is continuous. Once a furnace is fired and the first ribbon of glass is pulled, the line will produce several hundred tons of glass daily for 15 years or more until repairs or rebuilds are required.

Switching production from one type of glass to another—from one thickness or tint to another—requires that operators make slow adjustments to the batch or to the roller speed, and the ribbon of glass will gradually change. The intermittent glass made between processes will be made into cullet.

Producing high-quality glass on a modern float line requires constant monitoring, tweaking and adjustment, says Sword. “As much as we like to think of it as a science, it’s more of an art,” he says. “We are manipulating molten glass—floating it on a tin bath. We are trying to make a product that looks perfect. We have to be good at knowing the equipment, keeping it functioning properly, to do it right. … There are things we can’t automate; things that require we look at how the glass is performing [on the line], watch the glass stretch, observe the external changes.”

The fundamentals of float production remain unchanged from its original invention. However, industry companies have advanced and improved the process to meet customer needs, increase productivity and reduce required workforce.

A key focus of improvements is people. Manufacturer advancements, such as measurement technologies and cameras, pull more people off the line directly, increasing safety while improving efficiency and quality. “We have gone from having manufacturing operators to manufacturing technicians,” Imbrogno says. “We have some workers on the floor doing inspections, but most are in air-conditioned control rooms. We don’t need a lot of people to do it. They don’t need to be in the heat.”

The extreme conditions of a float line and the continuous nature of production create dangerous conditions if something goes wrong. A problem or interruption in production at any stage of the process requires immediate intervention. For example, a disruption at the “cold” end of the line, perhaps with glass cutting, would require workers to stop the continuous flow of the glass ribbon by breaking it, over and over, until operations are able to resume. Problems at the hot end are even more dangerous. Glass leaks can cause catastrophic damage at a float plant, putting employees at risk and forcing companies to halt production.

Manufacturers have greatly improved the safety of float production by focusing on preventative maintenance and developing backup systems. “Everything is preventative and predictive,” he says. “We are monitoring and responding to trends in the production instead of responding to emergencies.”

Because the glassmaking process requires such tremendous energy, manufacturers have worked consistently in recent decades to improve the efficiency of the process. For example, manufacturers cycle heat in the furnace, firing burners on alternating sides every 15 minutes. This ensures the air in the furnace is always heated, allowing for continuous melting and improving efficiency.

Another major development has been the introduction of oxygen fuel combustion technologies. Increasing the amount of oxygen fuel allows manufacturers to run more efficiently with lower emissions. The Rossford plant features the first oxygen-fired furnace in the U.S., built in 1989. Today, it is just one of two oxy-fuel float furnaces in the country.

Better materials and operations contribute to plant longevity. “Everybody is getting more life out of their furnaces,” says Sword. Part of this is necessity due to the capital outlay required, Sword says. The initial investment for a float line is $250 million. Companies have made improvements to production to make those lines last longer through better maintenance and more extensive repairs.

Imbrogno points to how the trend in the automotive sector for lighter, more efficient vehicles pushed manufacturers to produce thinner glass. In architectural glass, trends to heavy glass for showers, railings and more required floaters to develop thick glass that continues to remain free from imperfections. This corresponded with calls for increased transparency, opening the door to low-iron ultra-clear glasses.

Some float lines also include coating processes, in which metallic pyrolytic coatings are applied through chemical vapor deposition. Most common coatings include low-emissivity coatings, anti-reflective and self-cleaning.

On the horizon are even higher-efficiency products with advanced performance, says Sword. “People want aesthetics and performance, and they want functionality,” he says. “They want to let the light in, to have display options, to change colors, to generate electricity.”

The Rossford glass plant has witnessed incredible advancements in its 120-year history. That trend to innovation is unlikely to change, as the industry continues to advance and glassmakers continue to step up, say Imbrogno and Sword.

Despite the proliferation of advanced glass products down the supply chain, the root of the process will still be the furnace of molten glass and a tin bath. Sword says he anticipates float manufacturing will remain the primary method of glassmaking for the foreseeable future.

“The embodied carbon of float production might force a change—float manufacturing is still energy-intensive,” Sword says. “If someone figures out a more efficient way to melt raw materials and float the glass, we might see a change. But right now, there is no better way.”