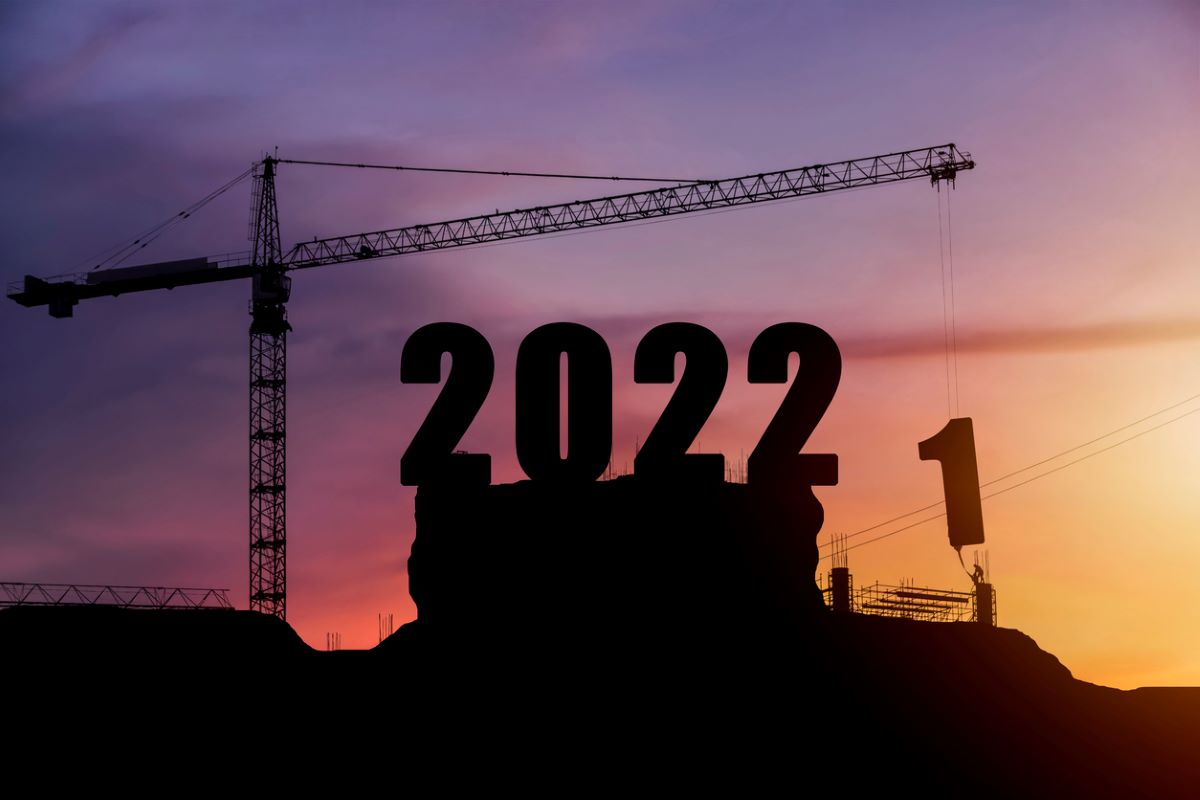 Highlights from the latest construction forecasts

1. A strong U.S. economic recovery is in the works.

Robust consumer spending and low interest rates will contribute to continued economic growth in 2022, according to Richard Branch, chief economist, Dodge Data & Analytics, and Cris deRitis, deputy chief economist at Moody’s Analytics, speaking during the Dodge Construction Network Construction Industry Outlook 2022, held in November. “The economy is on a much better footing than it was a few weeks ago, or even a few months ago,” says deRitis.

The economists project that U.S. GPD will close out 2021 at just under 6 percent year-over-year growth. In 2022, they forecast GPD growth topping 4 percent. “This is very strong on a historical basis,” says deRitis. “2022 should be a very positive year for GPD, for consumers, and we should see very good job growth.”

2. The construction segment is resilient and growing.

The Dodge Momentum Index, which serves as a leading indicator of future construction spending, ticked up “significantly” since the beginning of 2021, says Branch. Perhaps even more importantly, the index has become more well-balanced toward most types of public and private building projects, he says. The number of projects in bidding also suggests market resilience. The count of general projects is ahead of this time in 2020 and a little bit behind 2019 levels. “We feel pretty positive about construction starts next year, but cognizant of the many challenges that face the sector,” Branch says.

Total construction starts will rise 6 percent in 2022, which is higher than 2019 levels. Much of that growth, however, is skewed toward the residential sector. Taking residential out of consideration, 2022 would be three to four percent shy of 2019 on a nominal dollar basis, says Branch. “It’s a long road back to full recovery for the construction space,” he says.

3. Institutional, retail and warehouse lead the way for nonresidential spending.

The recovery of commercial starts will even out in 2022 after staging a strong 2021, regaining about half of what was lost in 2020, says Branch. Much growth until now has been based on warehouse construction, but commercial construction will have a broader base moving forward, with renovation being a key source of growth.

Warehouse starts “continue to stagger the imagination,” says Branch. The sector will amount to $46.7 billion in 2021 and an expected $52.8 billion in 2022. In fact, the first three quarters of 2021 were the best three quarters in the history of tracking warehouse starts. The lack of short- and long-haul truck drivers may incentivize warehouse developers to keep building larger distribution centers closer to each other instead of one larger one feeding smaller warehouses.

Institutional building starts will recover “solidly” in 2022, with education accounting for about half of all activity. K-12, college and university construction is down. Lab space leads the education sector. Meanwhile, health care shows the most strength outside of warehouses. Hospitals continue to outperform clinics and nursing homes.

Other sectors that will see growth in 2022 include transportation and data centers.

Office starts “continue to underwhelm” as demand for the space remains uncertain. Occupancies may start to improve in the second half of 2022, assuming no COVID variations enter the equation, says Branch. Renovations account for about 40 percent of all office activity, about 10 percent higher than historical numbers.

Hotels have what Branch describes as a “limited path to full recovery.” Although tourism is increasing, business travel still lags, and that’s where hotels make the majority of their money. “Hotels will not return to 2018 levels within a five-year space,” he predicts.

Finally, manufacturing centers have been “a real pleasant surprise” with construction starts in 2021, but Branch expects the number to be flat in 2022 as challenges in the manufacturing labor market restrain activity. Automation in plants will be key to future growth in the sector, says Branch.

5. The residential market will ease back but stay strong.

The residential sector has been on “absolute fire,” Branch says, and will likely ease back next year. The sector grew 14 percent in 2020, with much of that growth backloaded in the second half of the year. Branch expects a comparable growth rate in 2021. “Growth in the first half of 2021 was strong, but as we got toward the third quarter, single-family eroded pretty quickly,” he says. “We’re about 10 to 11 percent below where we were at the end of 2020.” Even so, this is the first time since 2006 that the single-family market will exceed 1 million units.

For single family, Branch expects 2022 to bring about a more tepid and sustainable pace. Home sales may have slowed from the “torrid” pace earlier this year as affordability has weakened, “but we’re not seeing a cataclysmic erosion.” In fact, every state is positive on single-family construction; none are underwater.

One of the biggest headwinds facing companies headed into 2022 is difficulty finding workers. As of November, there were 10.4 million job openings but only 7.7 million people unemployed, according to deRitis. “We’re in this strange time period where we have more job openings than people unemployed, which suggests the labor market has more opportunity today for folks looking for work.”

DeRitis cites three reasons for this. One, there’s an ongoing pandemic and people are still getting sick. Two, parents are struggling with childcare, and women aren’t returning to the workforce as quickly as men are. And three, baby boomers retired early, which he says is a structural change, whereas the first two reasons are cyclical.

The situation is perhaps more dire for construction companies. The segment lost 1.1 million jobs in the first two months of the pandemic, adding to an already difficult labor situation for construction firms. While the sector has rebounded, many of those workers have not returned. As of October 2021, construction employment was 150,000 (-2.6 percent) below the pre-pandemic peak in February 2020, according to the Bureau of Labor Statistics. Branch notes that labor shortages aren’t a new phenomenon for the industry. “It’s not temporary,” he cautions. “It’s systemic and could certainly mute construction starts and activity in 2022.”

Employment in manufacturing has also lagged. Employment in the sector is down by 270,000 since February 2020, according to BLS.

Many employers are beginning to face COVID-19 vaccination mandates. A new Occupational Safety and Health Administration emergency rule, set to go into effect Jan. 4, would require vaccinations at all employers over 100 people. At press time, challenges to the rule will go before a federal appeals court and potentially the Supreme Court. But no matter the ruling, many industry companies are already facing mandates on certain construction sites, such as medical facilities.

The mandates pose challenges to industry companies, as vaccinations lag among construction and manufacturing workers. Ken Simonson, chief economist for the Associated General Contractors of America, reported in his Nov. 11 Data Digest: “The vaccination rate among construction workers in the four weeks through October 24-30 was 52.5 percent, compared to 80.7 percent for other occupations, according to the construction safety and health research organization CPWR. Conversely, construction workers have a far higher ‘vaccine hesitancy’ rate, 43.9 percent versus 17.3 percent for other occupations.”

The vaccination rates from the manufacturing sector are slightly higher, though still lower than the nationwide average. A November Sikich Industry Pulse survey of manufacturers and distributors found that most respondents (28 percent) reported vaccination rates between 41 percent and 60 percent. According to a November Morning Consult poll, 21 percent of manufacturing workers said they were opposed to the vaccine.

8. Price inflation (and supply disruptions) should ease in 2022.

Material and consumer prices are up significantly in 2021, says deRitis. The drivers behind inflation: continued supply chain delays and disruptions resulting from the initial COVID shutdown and ongoing recovery. “This is really due to the supply chain [issues] as we are reopening the economy. Everyone is trying to go through the door at the same time. There is limited supply and lots of demand,” says deRitis.

In 2022, production and transportation should begin to return to normalcy, which should ease inflation. “Inflation as it relates to materials will probably last into mid-next year before we start to see prices pull back. But even as they pull back in the back half of 2022, prices should remain fairly high at least through the end of next year,” Branch says.

“Historically, the cure for high prices has been high prices,” deRitis adds. “We’ll see more business expanding and adding more supply to alleviate supply chain effects, and that should lead to more goods being available. We’ll also see more people entering market. So, some of the wage inflation should subside as well.”

DeRitis expects hotter inflation to continue for one or two quarters before moderating to a 2.25 percent rate.

A silver lining to the pandemic has been productivity growth, says deRitis. “Businesses invested more in IT, machine learning, AI and remote work,” he says. “Those are now bearing the fruit in terms of enhanced productivity. Right now, it’s about a 2 percent year-over-year growth rate, compared to a 1 percent growth rate before the pandemic.”

“The ability to do more with less is what will be a critical path forward in terms of increasing your profit margins,” adds Branch. Productivity growth in construction, however, is difficult to come by, he says, with the multifamily space being the one exception. Branch also urges companies to consider productivity growth beyond just on the jobsite.

Economists at Moody’s Analytics put together a list of key risk factors that could change the trajectory of the economy in the next few years, says deRitis. Among the risks included are international concerns (for example, an escalation in U.S.-China tensions) and domestic concerns (such as a government shutdown).

One more likely event that could trigger a more severe economic shock is another wave of the pandemic. “This would certainly cause the economy to stall. Or, if it was really bad, you could see a recession as consumers pull back on spending,” deRitis says.

Branch also identified several risks that could severely impact projected growth for the overall economy and for construction. “We can’t underscore the potential for a man-made disruption from the expected paths of growth; in particular, should there be a government shutdown, should the debt ceiling should not be raised, should the $550 billion in new infrastructure spending not be approved. Any one of those changing could certainly alter the landscape of our construction starts forecast,” he says.