Training the Next Generation

A look at how glazier apprenticeship programs can help solve labor, wage and quality issues 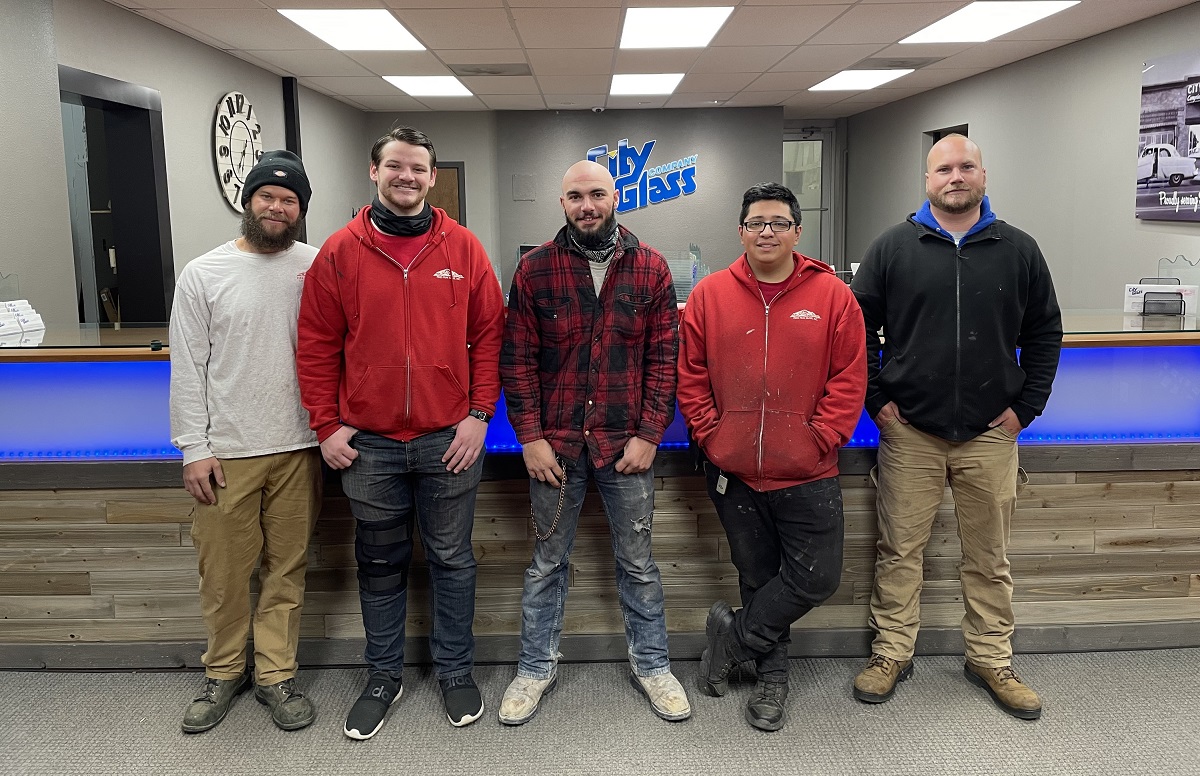 Finding and keeping skilled labor is the top challenge facing U.S. glazing contractors. In response, a growing number of companies and industry organizations are looking to apprenticeship programs to bridge the skills gap and train the next generation.

“If we want to attract people to the industry, we have to invest in them. Apprenticeship programs tell new hires that this is not just a temporary construction job, it is the start of a long-term, profitable career,” says Jenni Chase, director of content, education and training at the National Glass Association.

“All Registered Apprenticeship Programs guarantee that an apprentice will receive a portable, nationally recognized credential upon completion,” according to the DOL.

Resources for administrators and apprentices
apprenticeship.gov

Why start an apprenticeship program?

“We need more young people. It’s our challenge—not only in the glazing trade, but in all trades,” says Mark Applegate, general superintendent, Pikes Peak Glass in Colorado Springs, Colorado.

“Experienced glaziers are continuing to retire, and with the push toward more formal education through four-year colleges, there is a lack of people coming out of school and going into construction trades,” says Chase. “People don’t know that they can build a career as a glazier. And even if they do catch wind [of the glazing trade], they are coming in completely untrained.”

Apprenticeship programs can be a powerful recruitment tool for the industry. They allow workers to get paid while they learn a trade—an incentive for new recruits. “It allows an option for people who don’t want to go to college, who want to learn a trade,” says Angie Peters, residential operations manager for Pikes Peak Glass, which developed an in-house apprenticeship program with its sister company, City Glass Co.

“Some kids are meant for college. But for others, an apprenticeship program allows them to show their families, their friends, that they’re still working toward an education, that they’re continuing the education process differently,” says Tom Hall, training manager for Salt Lake City’s Steel Encounters, which has been a leading force in developing the Utah Glass Association’s apprenticeship program.

Apprenticeship programs also assist with retention. “Turnover is a huge problem. New people sometimes cycle in and out within weeks or months,” Chase says. “By getting new employees into an apprenticeship program, you’re showing them that you care about their future. And in turn, you’re asking them to commit to the trade, the training and your company.”

Some jurisdictions require that contractors working on public projects employ apprentices. “In certain states, you aren’t able to bid on some jobs if you don’t have a state-approved [apprenticeship] program,” Chase says.

Prevailing wage requirements are also a factor for some companies. “On government work, if you don’t have an approved program, you have to pay a full Davis-Bacon [prevailing] wage to all workers onsite, even to someone that has two days on the job,” says Applegate. However, apprentices can be paid apprentice wages for public works projects. This allows companies to pair apprentices with experienced glaziers onsite, without paying a labor premium, Applegate says.

“Glass and glazing is such a highly specialized trade,” says Brandon Hood, human resources manager for 8G Solutions, Riverside, Missouri, which developed its own apprenticeship program. “It helps to have an in-house personnel training program where our guys can continually learn—learn company culture and values, and learn a plethora of information about everything glass. We have our apprentices learning curtain wall, learning storefront, but also learning how to cut glass.”

“Our companies cover the whole spectrum of glass work,” adds Applegate. “We do residential—shower doors and mirrors—and we do new construction. … We need the full spectrum of training.”

Steel Encounters incorporated life skills training into the curriculum for apprentices in the UGA program, says Hall. “We have a session on banking—how to avoid getting into bankruptcy. We’ve had therapists come in to cover how to have hard discussions. We are trying to teach skills that will help them get through life,” he says.

The curriculum included in an apprenticeship program doesn’t have to be limited to new recruits. 8G, for example, uses its program to train both new and existing employees. “We really look at this as a way to train up new leaders—the next foreman, the next superintendent, the next project managers,” Hood says. “We want to show people that your career doesn’t stop here. We need people who are developed, who are experts.”

“My biggest advice would be: understand the entirety of what is currently operating and required in your state,” says Harris. “Talk to your state representatives, apprenticeship and training committees. They want to help. They were our best friend in the process.”

“Without the Department of Labor, you’re not going anywhere,” Hood adds. “The program won’t get off the ground without consulting from them, getting standards approved, getting the program approved.”

2. Talk to someone who has done it.

Experienced administrators can share information on developing the on-the-job training schedules, and companies working within the same state or federal requirements can provide additional support. “We reached out to other companies who are doing the federal program to understand the requirements,” Applegate says.

NGA is also there to help. “We have worked with groups to set up glazier apprenticeship programs in Connecticut, Utah, Oklahoma, Missouri, New Mexico and Oregon, and have learned a lot along the way,” Chase says. “In the past, the classroom work component was a huge barrier. Now that we’ve solved that problem, the approval process is a bit easier.”

In most jurisdictions, companies can develop their own internal apprenticeship program. (Some states require individual companies to team up with another company or organization to co-develop a program.) Developing an internal program gives a company additional control over the curriculum and management. However, it also requires the company to act as program administrator.

Companies can also look to state-wide organizations to develop programs. The new Utah Glass Association, for example, formed in part for the purpose of launching a glazier apprentice program. Having the association run the program means that member companies can access the benefits of the apprenticeship training without taking on additional administrative responsibilities.

Once a program is approved, companies must turn their attention to promotion and recruitment.

“Go to different labor programs within your city. Go to individuals who might be graduating with a construction management associate’s degree. You might have to go to high schools. Let them know they can enter an apprenticeship program and three years out of high school be making $29 an hour as a journeyman,” says 8G’s Hood. “A lot of people really get interested when they find out they don’t have to spend $120,000 on a four-year college.”

5. Make it a company-wide project.

As apprentices progress through a program, celebrate and publicize achievements. Public acknowledgement motivates apprentices, aids in retention and helps build community. “We have a training board where we highlight when someone has finished something,” Peters says. “It’s amazing. You’ll see employees high five. You’ll hear lead guys telling apprentices to keep going. It builds camaraderie.”

6. Remember why you’re doing it.

The term of the apprenticeship is three years with an on-the-job, or OJL, attainment of 6,000 hours, supplemented by the minimum required 436.38 hours of related instruction.

Ratio of Apprentices to Journeyworkers

Binswanger Glass launched a major training initiative this year to create a uniform training playbook for major field roles for both on-boarding new employees and continuing development of its existing workforce.

A formalized training program was essential for Binswanger, because of the company’s diverse business operations and large number of locations, officials say. The company is a full-service retailer and installer of architectural glass and aluminum products for the construction, residential and automotive markets. It operates 60 locations and employs nearly 800 workers.

The new program offers training for four job roles: branch managers, customer service representatives, glaziers and project managers. The program provides a playbook for each job function. Developers reviewed current processes of how each area received training and then designed a “new and improved” documented program that could be rolled out and easily tracked on the company’s online HR and payroll software platform, Paycom.

For its curriculum, Binswanger is utilizing online glass industry training through MyGlassClass.com, from the National Glass Association. MyGlassClass provides over 60 courses that are designed to complement—and shorten—companies’ hands-on training.

Why did Binswanger decide to formalize its training processes?

JB: We did not have documented training for each job role. A new hire received some on the job training, but there was not a consistent and tracked program. This can lead to employee frustration and churn.

Why are uniform training programs important for glazing companies?

JB: When you don’t have a training program in place, it causes inefficiencies. You are hiring people with no experience in glass. They don’t know industry definitions. Formalized training creates a uniform playbook for new people.

What do you hear from employees?

BN: We have done a lot of employee surveys, at 90 days, and exit surveys after termination. One big piece of feedback we hear from HR is that employees were requesting a lot more training.

How can training aid in worker recruitment and retention?

JB: The employee experience is just as important as the customers’. Finding skilled labor in glazing is super hard. Building this program out helps with recruitment. Additionally, it helps with retention. A lot of glaziers are looking for a path to possibly be a branch manager one day. Employees see right away that they’re going to have continued training. It gives them a career path and helps to retain those employees.

What’s the payoff for companies?

BN: You’re going to be paying for training or you’re going to keep paying for new glaziers. Training is an investment that is going to pay off. You’ll get a better and stronger labor force with happier employees.

JB: The biggest challenge for companies is overcoming objections of paying for a training program. But if you make the investment with employees on front end, they are going to be more loyal. If you don’t have basic training, you’re not going to have the results you want from a new hire.

Is an apprenticeship right for you?

Learn more and check out curriculum from the NGA.