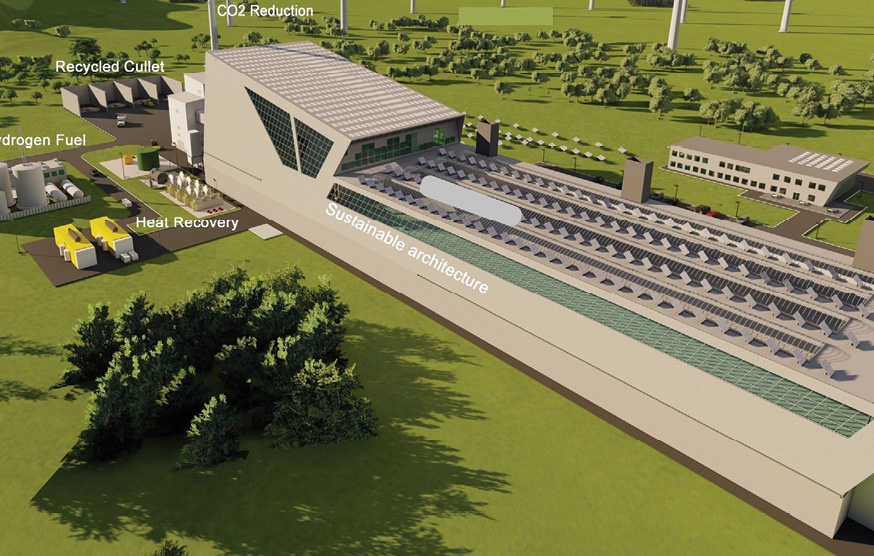 It’s not often the North American float glass industry welcomes a new plant, let alone an entirely new company, to the market. So, the March announcement that Canadian Premium Sand would be throwing its hat into the glass ring and starting up a float plant outside of Winnipeg, Manitoba, certainly caught the industry’s attention.

CPS, a sand mining company based in Calgary, plans to build a sustainable float glass manufacturing and coating facility. The plant will rely on high-quality silica sand from the company’s Wanipigow, Manitoba, sand deposit to produce coated high-performance glass and low-iron glass for the growing solar glass market.

The newly formed glass arm of CPS, called Wanipigow Glass, would mark the return of float glass production to Canada, a distinction that, up until February, looked to be going to Xinyi Glass, which announced a Canadian float plant in Ontario back in 2018. However, Xinyi’s plans have been twice quashed due to local pushback—first in Guelph Eramosa Township and then in Stratford—and in February, officials announced they were indefinitely suspending plans for the facility.

I was able to meet with the CPS management team to ask about their ambitious endeavor into a new market. What attracted a sand mining operation to float glass in the first place? Why Winnipeg? And how will the company navigate the approval challenges that twice stymied one of the largest float glass producers in the world?

Glenn Leroux, president and CEO, and Anshul Vishal, vice president of business development, expressed confidence in the plan and excitement in the growth potential of the solar glass market. They say the time is right, with the current North American supply of float glass struggling to keep pace with demand, and the place is right, with Winnipeg’s access to not only high-quality low-iron silica sand, but also to renewable energy sources.

“We have a vision for this. We have support from the community and [ways to address] problems for sustainability,” says Leroux. “We really believe there is an immense amount of potential here. … Winnipeg is an underappreciated distribution hub. The whole area of the Western states is at our doorsteps. … In five to 10 years, this area could become a center of excellence for glass.”

Wanipigow’s sand deposit was not initially intended to be used for glass. “We were developing the deposit for frack sand. … But we all know what happened to the oil and glass sector. So we scuttled those plans,” says Leroux. “We looked at this deposit from another light.”

The CPS team tested the sand in the deposit to determine potential end-uses. “The lab test came back with low-iron, and we came to the conclusion that this is a very high-quality deposit for float glass,” Leroux says.

Once the team knew float glass production would be an option for the sand deposit, it turned its attention to numbers. “We started looking at value-added manufacturing component of it—float manufacturing for the energy-efficient glass market, solar glass,” says Vishal. “We looked at the input costs for where it’s located, and it just jumped out as something that made a lot of sense.”

The demand is there, they say. Float supply is already strained in North America, with a manufacturing deficit of about 900 tons per day, per CPS estimates. No other floats have been announced, and the gap between available glass supply and demand is anticipated to grow to 2,350 tons per day by 2025. “The more we investigated, the more we understood the cost/benefit,” Vishal says.

The Winnipeg location also provides an opportunity for sustainable manufacturing, they say. This begins with the local grid. “The Manitoba electrical grid is more than 90 percent renewable with hydroelectricity,” Vishal says. “We’re able to align very well with the provincial climate action priorities for sustainable development.”

CPS intends to incorporate sustainable manufacturing initiatives such as waste heat recovery and enhancing fuel with oxygen. And the company is looking into water re-use. “The city just spent a great deal of money on water treatment. We may be able to incorporate gray water,” Leroux says.

The company’s sustainable focus continues through its end products—high-performance and solar glasses. New energy codes and sustainable building standards are driving demand for such products, they say.

According to CPS, the solar glass market has grown 466 percent in the last ten years and is expected to double in the next five years.
“We are looking at it from a holistic view and thinking about the embodied carbon of the products going into buildings,” Vishal says. “We want to build a plant that serves the immediate needs [of the building industry] and can serve future needs as well.”

Leroux and Vishal say the roadblocks faced by Xinyi Glass are not a factor in the plans to build a a plant near Winnipeg. “We’ve been watching what happened at Xinyi,” says Leroux. “Xinyi had the capital; they had the expertise. They had everything a glass company would want. … The only thing they didn’t have was the social license. We’re not worried about that at all. We have a jurisdiction where this makes so much sense—a piece of property in greater Winnipeg, a city that has a vision. We’re bringing 300 permanent jobs with the potential to expand.”

That’s not to say CPS doesn’t face its own hurdles—the first being financing. “We need to bring in the capital to bring us to the next phase,” says Leroux. “We are out raising money to complete the engineering and permitting.” CPS is working to raise necessary capital through 2021 with a goal of breaking ground in 2022.

The team’s second challenge is building a team of glass experts. “We have to build a team. We want to bring in people who see this vision and have expertise to realize that vision. That is a key component of this,” Leroux says.