Keep DIY Fixes out of the Glass Plant

Growing up, my dad was the king of do-it-yourself fixes. He used to say that, provided with enough duct tape and a hanger, he could create a quick, temporary repair for almost anything that went amiss around the house. Those handy DIY fixes, however, are not for the glass plant.

Last week at the Insulating Glass Manufacturers Alliance Winter Conference in Austin, Texas, glass industry safety guru Mike Burk offered strong words of warning about DIY fixes on the factory floor. Burk is the North American technical representative for Sparklike Oy and has been a leader of the IGMA Glass Safety Awareness Council for many years. 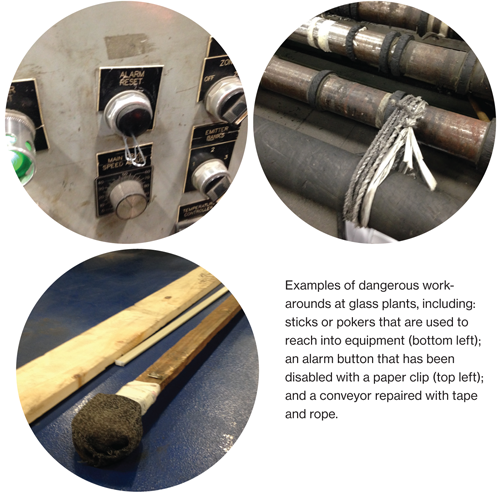 While DIY fixes are common and often successful at home, they present a major risk to safety in a factory environment, Burk says. Plant managers and maintenance leaders should keep a close watch for DIY fixers in their facilities.

Burk has a term for people who attempt to implement DIY fixes: “jigglers.” (The term references jiggling the handle to stop a toilet from running.) “You have to watch for the ‘jigglers’ in your plant.” he says. In the glass plant, those “jigglers” take shortcuts or workarounds in an effort to make machinery run better or faster, or in an attempt to fix a problem with a piece of equipment, Burk says. “They think they know more about the machine than the maintenance guy,” Burk says.

In glass plants over the years, Burk has identified a number of common shortcuts and workarounds instituted by “jigglers.” “I’ve seen start switches held in with wire or a paper clip, bypasses to the safety switch. Sticks and pokers and poles used to get product moving along the line,” he says.

Fabricators must train their maintenance personnel to be “jiggler catchers,” Burk says. “Your maintenance guys can spot these [workarounds]. … If they see duct tape somewhere on a machine, something is wrong.”

For more information, read an article that Burk wrote for Glass Magazine outlining shortcuts and workarounds to avoid.