Skip to main content
Blog Name
From the Fabricator

The Official GlassBuild Who's Who Recap

Well, that was a heck of a week…what a show we had in Atlanta. The opportunity to be back in front of people face to face really was energizing for all that attended, and my expectation of a motivated audience came true.

In addition to the vibes I mentioned last week (being “busy”) the trends that emerged from the show were that efficiencies and supply chain improvements are more than just marketing speak―it was truly the goal of so many there. Plus, the focus on a ready-to-burst renovation market was huge as well. We all know there’s still tons of challenges out there, but these three days showed that this industry is truly resilient, focused on overcoming every obstacle and on moving our world forward!

Now to my annual “Who’s who” at the show. After every big event I go on a pretty long name-dropping spree, so buckle in and follow some of the flavor of the folks I was lucky enough to run into in Atlanta.

First and foremost, getting a few minutes with Don Friese was seriously special. Mr. Friese is so important to our industry (his Friese Foundation is incredible) and just being able to chat with him for a short period of time had me fired up. I am grateful for that time too! In addition, the Frameless Hardware Company (FHC) exhibit where he was holding court was packed all three days and I loved seeing folks like Keith Stockman and Jose Quinonnes there just working the spot at a frantic pace. Not sure if those two had time to breathe. Plus, my good pal, super rep Jeff Ziesche was there and I continue to be thrilled with the way he’s built his business.

I love seeing the West Virginia legend Joe Staffileno of Fuyao anytime I can, and same with the great Tom O’Malley of Clover Architectural. Tom doesn’t need a booth at the show, as wherever I saw him he always had a crowd around him―the man is incredibly popular! Tim McGee of Glass Coatings and Concepts always greets me with a smile and positive feel, as does Tom Herron of NFRC; both guys are always super to see. I did get to visit with the industry look-a-like for James Franco in Dan Poling of Schott, and it was an honor to hear this was the first event he’s attended since Covid broke.

Every show I try and pick out the best dressed booth team and this year, Samantha Hudeck and FeneTech win that recognition. Samantha always supports GlassBuild and I am grateful for that, but the organized and stylish looks really delivered a win on its own! Also winning was IGE’s Michael Spellman’s call to have a Forvet on the floor―that machine was packed and Manny Borda from IGE was in his glory walking people through the process. Very cool.

And I decided “best hair” this year (since I am jealous and have none) goes to Brad Bartley. Brad was in great spirits and fired up over his new gig at Consolidated. And he does have a quality head of hair for sure.

We are lucky as an industry to have some amazing young professionals. Among them, Kayla Natividad of NSG Pilkington. Loved meeting her in person―so much so I was speechless. Also impressive in this “future MVP’s of our world” were the duo of James Wright and Jeremy Hoy of Virginia Glass, Rachel Korfhage of Alexander Metals, Adrian Lowenstein of Skyline, David Corle, of HMI, Billy Britt of Britt & Tilson, and Nathan Seaman of Architectural Grilles and Sunshades. Keep an eye on all of these folks!

Starting Out During COVID

Dan Shields of Fabricated Products Group is a battler―guy started his business in the teeth of Covid and is kicking butt. Proud of him! Same with Tim Finley who also launched T.Fin Building Solutions at one of the toughest times too. I mentioned in a comment on a LinkedIn post that Tim has this amazing ability to fire up everyone he runs into. I dig Josh Burg of Glass Enterprises; sharp as hell and just a great guy and an industry bright spot.

I always get a charge out of seeing Brian Thomas from Super Sky. The work Brian and his team do is amongst the best our industry has ever seen. I also enjoy visiting with Mike Synon of HHH/Salem though I think I only saw him for 30 seconds because there was a line of folks waiting to talk to him. Plus, seeing David Anderson in that booth, too, was amazing since we go way back to my PDC days, not to mention being in the same fantasy football league for more than 20 years.

A big part of the event was the Mercedes Benz tour and one of the great sponsors of it was C.R. Laurence. Was so cool to meet so many CRL folks for the first-time including Crista Tekstra and David Nelson. Plus, my longtime friend Scott Goodman is there now, and I am so happy for him as I think he’s found his forever home.

I am also a big Rick Alexander of Tom Brown Inc. fan―smart and class guy―and he downplays his intelligence probably to make mere mortals like me feel better! Running into Devin Bowman of TGP was a pleasant surprise; it’s a heck of a distance from Seattle to Atlanta, so awesome of him to make the trip. Visiting with hands down the best plant and operations consultant in our world, Ron Parker, was an honor. Ron is unreal and every conversation I learn a ton from him. The fab plants that utilize him are extremely smart.

It was also fabulous to meet Mike Mazelon of Royal Glass for the first time in person. I think he enjoyed the heck out of the event, and he networked with everyone he ran into. Now that’s how you do a show!

Speaking of networking, the “Mayor of Glass Town” is none other than Jon Johnson. Jon was there in his new position with Arow Global and I am absolutely over the moon for him. Jon is a great one, and he’s going to do super in his new position. And also in a new spot, Joe Butler as senior vice president of sales and service for Glaston America. Good to say hi to him as well as Michael Schmidt there.

Greats from the State of Texas

I can’t do a blog about who’s who with a mention of someone from my favorite state of Texas, so props to Joe Lamberston and Brian Risinger of Country Glass. Kudos to them for making the trip and always supporting this industry. I also was pumped to run into Shawn Hickman and his bright purple jacket, Kyle Sword of NSG Pilkington, Cathie Saroka of Goldray, Jodi Martinez of AllStar Glass, and Ivan Zuniga and Sneh Kumar of Kawneer. All wonderful folks that I am lucky to know. 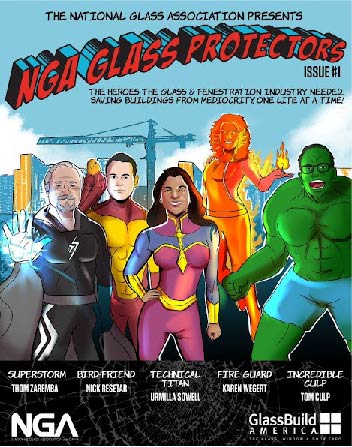 Last to the staff at the National Glass Association. These folks (led at the show by the absolutely unstoppable Molly Grenn) absolutely bring it, and I am humbled to even be a small part of that team. And to the insanely talented duo of Andrew Haring and Melanie Dettmer―thank you. Those two hoisted me on their backs several times over the last several months of planning, when I would inevitably fret about whatever bump appeared in the middle of the road. Plus, those two are also great friends of mine that I will always appreciate and adore.

So there ya go, another event in the books! I am sure I missed a bunch of people and I am sorry for any slights. I truly enjoyed seeing everyone I could. Next up is NGA Glass Conference in January (though I don’t think I’ll be at that one, but a crucial one for the tech side of things) and of course BEC and GPAD in March. We are back folks, back to doing things in person, safely and smartly, and we have to keep moving in that direction so we can elevate our world to the levels it needs to be. Nothing beats in person, interpersonal communication. The roadblocks are always going to come, but we can battle past them, and I am thrilled that we are pushing the tough times of 2020 into the far end of the rearview mirror.

Oh, and I end with this brilliant picture! Seeing these folks as super heroes is so cool and true―love it!! So perfect, and if these action figures aren't the hottest gifts at Christmas this year, I give up!