Editor's Note: This article and A New Chapter mark the fifth installment of Glass Magazine’s Exit Planning and Succession series. Search this site for "exit planning" for more from this series.

Succession is a critical component of a successful business exit. The process involves replacing the owner by moving chosen performers to a championship team, and eventually into leadership. This requires time, training and a strategic succession plan.

A successful succession plan outlines how to educate and build bench strength, groom emerging managers, develop leadership training, and identify future owners. The flexible plan may take several months to write and several years to execute. Depending on the readiness of a company’s management and the type of exit and current payout, a succession plan may last from three to 10 years. On the other hand, if the business is systematized and has clean financials with mature management in place, then the company could be “sale ready” in less than a year. This article presents nine key considerations of succession planning.

The succession process does not begin until the owner can begin to see him or herself outside the business and visualize a clear financial future outside of the business. This requires an exit plan. A large part of the exit plan is income replacement for the owner, tax reduction and legal risk reduction. (For more detailed information about the exit planning process, refer to A Successful Exit and Eight Disciplines of a Successful Exit.)

Seventy percent of companies fail to transfer into the second generation, and 90 percent of companies fail to transfer into the third generation, according to the Family Firm Institute. What is the main cause of failure? A lack of planning. “At any given time, 40 percent of U.S. businesses are facing the transfer of ownership issue. The primary cause for failure … is the lack of planning,” according to the Small Business Administration. An owner should not take this lightly. If you fail to plan, you plan to fail.

03. ESTABLISH A CLEAR DIRECTION AND FOCUS

The beginning of the succession process is a time for the senior management team to revisit the strategic plan, vision and mission. This process will be an exercise for the management team members to establish their roles, work as a team and establish a stake in the company’s future.

It will be the management team’s responsibility to take the reins and engage the company in this plan, and to communicate and ensure the plan’s implementation. The direction begins at the top, and this exercise will help the team to begin seeing their future.

Emotional Quotient, or EQ, has emerged as a way to measure non-cognitive skills. Some researchers argue that EQ is more important than IQ in the workplace, and studies have found that EQ is a key ingredient for leaders. Psychologist Daniel Goleman, who authored the book “Emotional Intelligence,” states that emotional intelligence is reflected in behavior, from self-awareness, to how one uses gut feeling, self-control of emotions, empathy, and the ability to inspire and influence others. An owner should consider EQ when choosing future leaders for their company.

Management succession is more than the replacement of talent; it is the development of talent. This is a time for the new team to reexamine and improve performance of the company’s systems in a process of continuous improvement for the company’s productivity and profitability. The new management team should lead this process and educational effort for the entire company. It is a time for the owner to coach and stretch managers into champions, and to help them to start thinking like owners.

Once a new management team is chosen, the owner must help them grow into leaders. Strong managers lead the company to meet deadlines and corporate goals. Those managers must now rise to a higher level of leadership to set a corporate direction and build consensus. An owner will need to work with those managers to change their behavior and build self-awareness, while still maintaining their spirit. Methods such as peer evaluation and personal coaching may prove helpful as managers move into the next level of leadership.

Succession and behavioral change take time, and the sooner training begins, the better the results will be. There are three parts to this training: education, coaching and stretching. An owner will spend about 30 percent of their time with the first two—education and coaching. The key is to leave 70 percent of their time for the stretching process. This is where managers are field-tested, and asked to apply their learning, make mistakes, adapt and mature. This is the most important aspect of the training process.

Every CEO must realize that their role with the new successor is to make sure he or she is prepared to lead the company. The owner and successor should collaboratively decide the process, timeline and curriculum.

Remember, this process is all about the new CEO, not the exiting owner. The exiting owner’s role is to teach, coach and ensure the company’s future success. The new CEO’s management and leadership style likely will differ in many ways from that of the existing owner. An exiting owner should let the new CEO find his or her own path unless they see a disaster in the making.

However, this process is often more emotional than an owner expects, and he or she must work to focus on life outside of the business. As I tell owners who are finalizing their exit, “Congratulations, and welcome to the Lame Duck Club.” 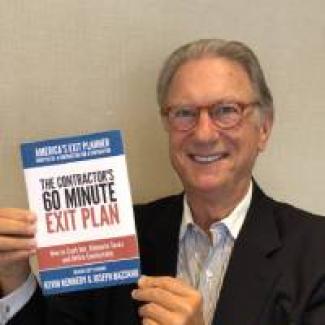 Kevin Kennedy is the founder of Beacon Exit Planning LLC and Beacon Merger & Acquisitions Advisors LLC. He is a nationally recognized speaker, author and thought leader for business owners for exit planning and succession. He personally walked the exit path and understands firsthand the challenges an owner faces from buying and selling a 200-employee company and implementing succession planning to the fourth-generation owners.