Business succession is inevitable, but certainly not always well-planned or expected. For a business to survive beyond its current generation, next generation leaders must be willing and able to step up and step into the shoes of a departing owner.

This article tells the stories of three industry company leaders who successfully took over leadership from a previous generation of owners, following death or illness. For these three business leaders, family hardship propelled business success as they each focused on a commitment to working hard and relying on the right people—carrying on the strong industry legacy left by their predecessors.

For Cliff Wright, succession happened overnight. While already managing and operating Layne Glass, Cliff took on the position of president of AAA Glass & Mirror, when his dad, Jerry Wright, passed away suddenly in November 2014. 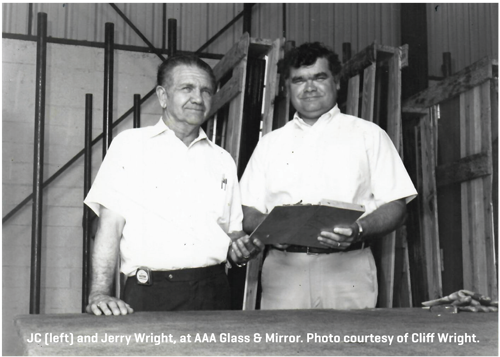 AAA Glass was founded in 1962 by Cliff’s grandfather, JC Wright. Jerry Wright worked at the business through high school and college, and took ownership in the 1980s. Cliff followed a similar path, working at AAA Glass “for as long as I can remember,” he says. When Jerry purchased Layne Glass in October 2013, Cliff moved to serve as president of the newly acquired business.

“When we had the opportunity to purchase Layne, I moved over there as president and operated the company separately for a year from October 2013 to October 2014 until my dad went in the hospital.”

When Jerry Wright passed away, he and his wife had only very recently begun discussing a five- to ten-year succession plan with Cliff. The unexpected nature of his passing created challenges, as the family and company worked to transfer management responsibilities and ownership.

“My dad loved working and would still be actively managing the business if he was still around,” says Cliff. “We had begun the process of putting our ideas to paper. Unfortunately, at the time of his passing we had not officially done so.”

Cliff determined to step into the leadership position at the company; however, it wasn’t easy. “The first year [after my dad died] felt like I was drinking from a firehose,” Cliff says. “It was a lot to take in, to go from running Layne Glass to overseeing both AAA and Layne. It was quite a bit of pressure as a third-generation [family business leader] to not let the family business down.”

After Jerry passed away, Cliff says he relied heavily on AAA’s long-time employees. He assured them he was there for the long haul, and then pushed them to take on more responsibility so they could continue to build successful businesses together.

“You can’t do everything yourself,” says Cliff. “The business is only as good as the people in it. Keep the good ones around, and make sure they know that they are important.”

Cliff’s mom also helped to fill the management void, and she continues to provide oversight by coming into the office one to two days per week. “She’s using her expertise from years of running the company with my dad to catch potential problems,” says Cliff.

The financial transfer also had to be determined. Full ownership of both AAA Glass and Layne Glass, as well as the title, transferred to Cliff’s mom after Jerry’s passing. Over time, Cliff will buy stock, with proceeds moving into a trust, for full ownership of AAA and Layne.

Cliff says his family business was fairly typical, by only talking about the future but never putting anything in writing.

“Do your family and business a huge service. Sit down as a family and have an open conversation; begin to form a succession plan in writing,” Cliff advises. “We put it off. We didn’t tie things up because we all thought we had more time. But tomorrow is not guaranteed.”

Despite the initial challenges of the unexpected succession, Cliff has managed to grow both AAA Glass and Layne Glass. Since he became president of both businesses, they have grown from about 15 combined employees to 50.

The transition of leadership was similarly sudden for Kyle Lamb, vice president of Universal Glass Co., who quickly took on full responsibility of the company after his dad, John Lamb, fell ill and was hospitalized for three months in 2015. Fortunately, after three weeks in a coma and another two months in the hospital, John recovered, and is continuing to lead Universal as 100-percent owner and president. Kyle, however, has retained his position of leadership since his dad’s return to work. 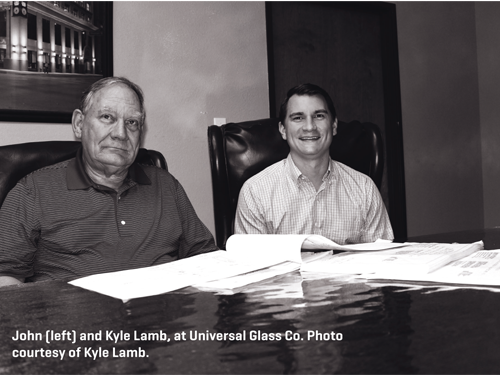 John bought Universal in 1986, the year before Kyle was born. “[My dad has] worked his way up from the field. I think building a successful business and making sure it stays that way keeps him in the industry. Continuing that legacy is a motivating factor for me,” says Kyle, who has worked alongside his dad during school breaks since he was a child. Kyle became officially employed at Universal when he graduated college in 2010.

For a year starting in 2011, Kyle went to work as an assistant project manager for another glazing contractor, which boosted his leadership potential. “My management input didn’t start mattering until after I got back from working at another company, and brought a different experience to the table,” Kyle remembers. He then returned to Universal and worked as a project manager and estimator until becoming vice president and an officer of the company alongside each of his parents in 2015.

As the only one of three children interested in working for Universal, Kyle and his parents had discussed the future of the company and Kyle’s place in it since he was in high school. But, it was only in a casual context. The three months of his father’s illness, however, had a lot of bumps for the family and for the business, prompting many more conversations about their succession plan. “We have a much better idea of how things will go if something like this happens again, or if my dad can’t be here permanently,” Kyle says.

While the previous transfer would have moved stock to Kyle’s mom, she does not want to run the business. Now, it will go to Kyle and another owner. “There's some structuring work to help make that happen … but there's a plan now in place for an untimely exit,” he says.

The family has also evaluated some of the most difficult aspects of the unexpected transfer, such as the absence of Kyle’s mom. Because John could have woken up or passed at any moment, she very rarely left the hospital—something no one ever planned for. “They built the company together, so she was the one who had the second-best understanding of the business,” says Kyle. He visited the hospital every morning and talked through decisions with his mom. “In hindsight, I was plan C,” he says.

Kyle says that while he led Universal, it was his personal goal not to make things worse. “My parents showed me how to work hard, get my hands dirty, be involved, and to take control when I need to. Ultimately, when things aren’t going right, it’s the responsibility of the person at the top to make it right,” says Kyle. “I got a small glimpse of what that was like.”

The year John was hospitalized, Universal had one of its best years ever, a success Kyle attributes 100 percent to Universal’s employees. “Everyone at every level filled whatever gaps in productivity we had, and to me that was the key to our business surviving,” he says. “If there is a major loss, you have to trust your people. Not just the people you work with, but your family and friends who want to help carry some of the burden. [Beyond that], there isn’t a substitute for working hard. When there’s been trauma to the business, you might have to be okay with working hard just to get back to normal. But just keep working.”

Business transfer at Trident Consolidated Glass followed decades of on-the-job training. In 1966, when he was 12 years old, Alex Kastaniuk, president and CEO of Triview Glass Industries, began working alongside his father, Walter Kastaniuk, at Trident Consolidated Glass. As time went on, he worked through every division at Trident, before becoming president in 2001, when Walter passed away. 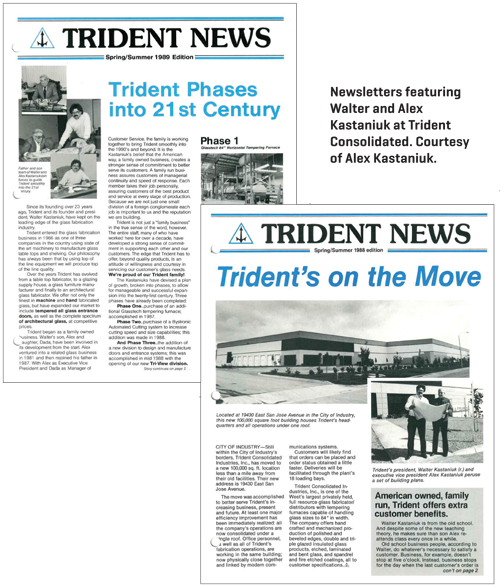 In the late 1970s, Walter sold off Trident’s secondary divisions and focused on building the company’s tempering business. In 1980, Walter was approached to become a third partner in a new company needing tempering capabilities. Instead, he offered the opportunity to Alex, who by 1981 became a third equal partner in Brite Vue Glass. The company did business out of the Trident building, and used Trident’s tempering furnace to fabricate doors. Alex owned 25 percent of Trident’s building and machinery, along with Walter.

By 1987, Brite Vue sold, and Alex came to work for Trident full-time again, as executive vice president. Walter and Alex put their money together to move Trident into a 100,000-square-foot building, with room for a bigger furnace, a bigger cutting line and more machinery. After a year, Trident opened a door division, Triview Entries. Together, with Alex leading the sales crew, they quadrupled Trident’s sales.

“My success comes from being able to follow the footsteps of my dad, and, when I left for Brite Vue … I was able to learn from [many people] what it really takes to make a business go,” he says.

Up until he passed away at 81, Walter still came into the office every day. “Everything my dad did, I was involved with. Every big decision, he was very open with me,” says Alex. After Walter died, full ownership of Trident passed to his wife, Alex’s mother, in a trust. When his mother passed, ownership transferred fifty-fifty to Alex and his sister.

When Walter died, Alex continued running the company the same way, using his experience and his dad’s lessons to keep the business afloat. He and his dad had considered selling previously, and in 2003, Alex sold Trident to Arch Aluminum. “I chose to sell to Arch Aluminum at that time because I thought it was a better deal for my employees. [The owners] gave me the same feeling as working with my dad. The father and son partnership idea, not just corporate,” he says.

Alex worked for Arch for three years, then took two years off to spend with his children. In 2008, at 55, Alex decided to go back to work in the industry. “I was too young to retire, and I still had too much to give to the glass industry,” he says.

To get back into business, Alex purchased the assets of Texture Glass Industries, which he then used as a stepping stone to start his company, Triview Glass Industries—an homage to Trident’s door division from years before.

While Triview was started during a recession, Alex attributes his success during the time to his employees, and his commitment to doing honest work for every customer, big or small, part of a larger work philosophy passed on from his dad. Triview has grown into a $16 million company in eight years.

“Learn the business from the inside out, not from the top down,” advises Alex. “You need to go in there and get dirty—get your hands into the midst of it. Work alongside and listen to employees. For me, any son or daughter growing up in the business has to get dirty, get in with the troops.”