The NGA Glass Conference kicked off Tuesday as an online interactive event with nearly 500 pre-registrants. NGA President and CEO Nicole Harris opened the event with a State of the Association address. She asked members to keep the following terms in mind: Live, play, learn, work, heal—all of which are the crux of NGA's vision statement, which are particularly meaningful in the midst of the COVID-19 pandemic. "When the pandemic changed our priorities," she says, "we asked our members what they needed most right now and how their trade association could help right now."

Harris detailed NGA's response, including sending several letters advocating for the "essentialness" of the industry and those in it, producing informative bulletins and technical resources, and creating downloadable resources to help navigate legislative measures aimed to help businesses stay afloat during the pandemic. Glass further played a key role during the riots associated with the Black Lives Matter protests.

Harris concluded by discussing GlassBuild Connect, a month-long online event during September that will connect buyers and sellers and deliver focused learning and education opportunities.

Other highlights of Tuesday included:

The NGA Glass Conference kicked off with Bernard Jean Savaëte, president of BJS.Différences, a glass industry consulting firm, offering data-based insights about the state of the global glass manufacturing industry in the wake of COVID-19. “The impact is severe on operations,” Savaëte says. “Most of Europe’s 48 melting installations had to cease production for several months. Tens of thousands of workers were without jobs. It is estimated that glass production in Europe will be roughly 20 percent below last year.”

Some recent announcements of production reductions:

“I would say that COVID is often accelerating decisions for manufacturers. It is sharpening existing difficulties. Several companies were already facing difficulties before the crisis,” he says.

This session kicked off with remarks from Carolyn Lee, the executive director for the Manufacturing Institute, the education and workforce partner of the National Association of Manufacturing, which pointed to the organizational changes that plants have been making on the factory floor since the beginning of COVID-19, including social distancing, staggered break times and temperature checks.

Subsequent speakers Tim Zuerlein, director of supply chain, advanced materials at Eastman Chemical Co. and Marcus Bancroft, sales manager for Vesuvius, both spoke to COVID-19’s impact on the supply chain. Zurelein emphasized communication with customers. “Transparency and trust are paramount. It does no one any good to overstate your requirements―state what are going to be your true requirements,” he said.

Bancroft also underlined the need to maintain an inventory of critical parts, especially due to disruptions in technical service. “It will save you a lot of money in the long term to invest in the spare parts now,” he said. He said it was important to think about what machinery/equipment parts might represent the “weakest link” in the operation, and stock parts now.

Alain Jardinet and David Deal of AGC Inc. discussed the role buildings will play in sustainability. Several large cities are taking it upon themselves to pass regulation related to efficiency and sustainability. Deal focused on NYC Local Law 97, which will require large buildings to meet carbon emission limits or pay fines. He anticipates other cities will follow suit.

Jardinet shared several glass advancements that can help with energy goals, including vacuum insulating glass, which can match triple glazing performance yet is four to five times thinner and 33 percent lighter, making it suitable for renovations; smart tinting glass to moderate light and thermal input through glazing linked to the building management system via control services; BiPV, which transforms the glass facade or skylight into an integrated smart energy source.

The conference will continue through Thursday, July 30. Follow along on Twitter with #GlassConference at @glassnation and @GlassMag, and look to glass.org, glassmagazine.com and next week’s E-Glass Weekly for coverage of the event. 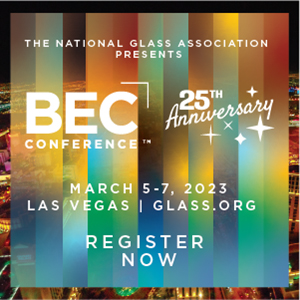