We’re just at the beginning of our journey combining two impactful trade associations—the National Glass Association and Glass Association of North America. I’ve learned a lot this past year, and even more since Feb. 1 (the official merger date), and again more last week during our Annual Conference in Napa, California.

One realization has not changed. After 28 years in the glass and glazing industry, my deep appreciation for what the legacy GANA volunteers have achieved and continue to strive for at meetings only intensifies.

Intensifies is the operative word. Our global industry is ever more complex and demanding, and the impact is felt first on the technical stewards of glass technology, processes, codes and standards.  One way to recognize what we fight to protect is embodied in the annual awards dinner.

Focused and aware industry volunteers drive the association’s technical activities. The following stand-out volunteers were recognized for their contributions.

The organization’s highest recognition, the C. Gregory Carney Member of the Year Award, went to Rick Wright, director of technical services, Oldcastle BuildingEnvelope. Wright has decades of experience and leadership in the glass industry. He has been a longtime dedicated contributor to association technical activities. The award is named after industry leader and former GANA Technical Director Greg Carney, who passed away in 2013.

"Rick exemplifies all that Greg Carney represented in the glass and glazing industry," says Urmilla Sowell, NGA technical director. "Rick tirelessly advocates for glass in several standards and codes bodies—ANSI Z97, IGCC and SGCC, ASTM AND GICC—not just the association. He has served on the GANA board and is a great asset to the association and glass industry."

Kayla Natividad, architectural technical services engineer from NSG Pilkington received the Energy Division Member of the Year Award. “This is only her second Annual Conference, but she has jumped in eagerly to the association activities since last spring,” says Mark Silverberg, president of Technoform North America, who presented the award. Natividad “has participated in the Energy Applications [Glazing Informational Bulletin] specifically, but has also contributed to multiple other task groups within the flat glass and insulating divisions.”

Bobby Chestnut, sales project manager, Standard Bent Glass, was recognized for his work in the Decorative Division. Chestnut has chaired the task group on How to View and Assess Decorative Glass Products for the last two years. “He signed on for this task at one of his first meetings, choosing to jump right in,” according to James Wright, sales director, glass division, ICA North America, who presented the award. “He has also used in person meetings such as Annual and Fall Conferences to convene his task group to make headway together in person,” Wright says.

Jeff Haberer, director, technical services, Trulite, was recognized for his contributions to the Laminating Division. “A long-time member of the glass family, [Jeff] has contributed to various organizations continuously throughout many years. His contribution to NGA/GANA has helped us probe issues deeper and more thoroughly due to his ability to look at issues and opportunities with various perspectives,” says Julia Schimmelpenningh, industry technical leader, customer applications and service lab manager, for Eastman Chemical Co. Schimmelpenningh presented the award to Haberer. “Jeff’s contribution to the laminated glass area over the recent years has proved to be just as valuable to the industry as his previous concentration on the insulating glass side. We honored Jeff with the Laminating Division Member of the Year award because he not only drives us to be better, but he provides the background for the laminated glass industry to thrive.”

The Tempering Division Member of Year Award went to Ren Bartoe, director, glass and industrial technologies, at Vesuvius. Bartoe has been a long-time supporter of the legacy GANA organization, with active involvement in both the tempering and marketing committees. He also serves on the Integration Task Force, a group of association volunteers dedicated to successfully integrating the NGA and GANA. Bartoe was unable to attend the Annual Conference; Marcus Bancroft, sales manager, Americas, at Vesuvius, accepted the award on his behalf.

Mitch Edwards, technical manager of Guardian Glass, was recognized for his work in the Flat Glass Manufacturing Division. “Mitch has been an excellent resource to the association with his 10 years serving as the FGMD Technical Chair,” says Sowell, who presented the award. “Mitch also collaborates on several task groups within the tempering, insulating and decorative divisions.”

Joe Erb, commercial sales specialist for Quanex Building Products, received the Member of the Year Award for the Insulating Division. Erb has more than 20 years of experience in the industry, with an in-depth knowledge and awareness of the high-performance glazing industry. Erb has been a long-time volunteer within the legacy GANA organization, and is a regular contributor to Glass Magazine. Erb was unable to attend the Annual Conference.

The final division award went to Ted Derby for his work in the Building Envelope Contractors Division. Derby, of Intertek, previously served for a decade in business development at glazing contractor LCG Facades. “Ted has been attending the BEC Conference for over a decade. Over time, he has taken on leadership roles within the BEC membership’s task group, most notably as a member of the task group updating the Blue Print Reading and Labor Estimating Course,” says Sara Neiswanger, NGA’s senior manager, GANA member services. “He has also acted as the grader of the Blue Print Reading Course for the past four years. He has taken a true interest in the students’ progress and understanding in completing the course and has also played a key role in helping translate the manual content into a complimentary online platform.”

Nicole Harris is president and CEO of the National Glass Association. 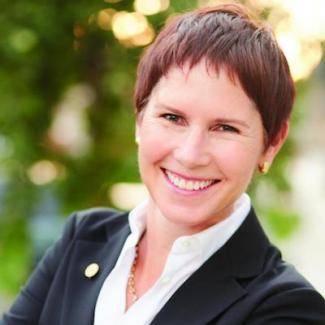 Nicole Harris is president and CEO of the National Glass Association.