The Rise of Mass Timber

The 2021 building code is set to allow mass timber buildings up to 18 stories high. What are the fire, seismic and structural performance considerations? 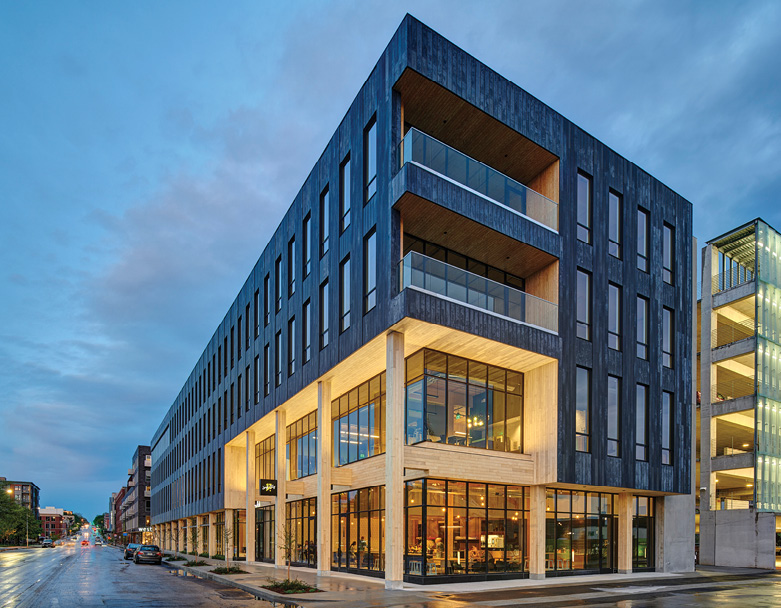 Above: 111 East Grand is a spec office building in downtown Des Moines, Iowa, a 4-story mass timber structure (Type IIIA), with retail at the first level and three levels of commercial space above. The structural gravity system consists of DLT panels over glulam post and beam substructure. The lateral system comprises a precast concrete core and walls. The project is a collaborative development between JSC Properties, Rypma Properties, Christensen Development and Ryan Companies.

The 2021 International Building Code will include provisions that permit the construction of tall mass timber buildings up to 18 stories—a notable increase from the previously allowed maximum height of six stories. The move reflects a trend in the U.S. building market as it takes greater note of mass timber as a viable option for tall buildings, an already widely accepted building method in Europe and Canada.
Mass timber includes any product permitted for use in Type IV construction, which, according to the American Wood Council, encompasses building products such as cross-laminated timber, known as CLT, dowel-laminated timber (DLT), structural composite lumber, glued-laminated timber and large section sawn lumber.

The material has several inherent benefits, according to industry sources. One is its light weight—it is about 92 percent lighter than steel and 80 percent lighter than concrete, which can have “huge impacts” on the foundation design, says Nick Milestone, director of mass timber at Katerra. The product also emits less carbon during manufacturing and creates an airtight detail, thereby reducing the building’s lifetime energy costs, says Milestone.

Mass timber is relatively new to the U.S., says Milestone, who has worked in the mass timber market in the United Kingdom since 2005 and has traveled the world, including Singapore and countries throughout Australasia, to help those governments push for mass timber development and solutions. “The U.S. is in its infancy but has put a very strategic prescriptive roadmap together to allow for the adoption of mass timber. Because of the adoption of the materials and new building code changes that will allow the progressive build of mass timber, it will only take five years for the U.S. to catch up with the rest of the world,” he predicts.

This up-and-coming construction method is important to be aware of for all building industry companies, including those in the glass and glazing industry, sources say. However, it doesn’t necessarily alter glazing methods, they say.

This building code development is years in the making. Shiling Pei, associate professor, civil engineering, Colorado School of Mines, explains the progression of material codes to design codes, then to the International Building Code for the actual application.

When the American Wood Council approached the International Code Council with a request to form an ad hoc committee to study tall wood buildings, the ICC was particularly concerned about two questions. One: would wood structurally support a tall building? And two: if a fire breaks out, would it lose its structural supporting capability?

The Art of the Wood Curtain Wall

Timber is also making its mark on the façade. “Wood curtain walls have risen in popularity in recent years because of more competitive pricing, manufacturing process improvements, consumer awareness, and an overall shift toward design aesthetics that incorporates wood,” says Greg Header, president, Solar Innovations Architectural Glazing Systems. “Customers are always skeptical at first, but as wood curtain walls become more mainstream and they start to see the final projects, they begin to jump on board. Some projects are designed up to five years out, so it takes time for those projects to come to fruition.”

Spans and supports are two important considerations with wood curtain walls. “Keeping a span of wood curtain wall under 24 feet is important to reduce structural concerns,” he explains. “Using a structural horizontal member at the midpoint allows you to use much finer, lighter material compared to what would be used for full-height framing. This design will also make the project much more affordable.”

Using proper finishes and sealers to ensure the wood can withstand moisture is also important. Solar Innovations recommends using an aluminum-clad exterior finish when the curtain wall is exposed to the elements. Header says, “When installing, it’s best to cover a wood curtain wall or seal it so it’s not exposed to a moist environment.”

Header anticipates the market will continue its growth and advises buying from a reputable supplier, with years of project experience, whose products have undergone certified testing. He also recommends installers be well-informed about the product, perhaps even visiting the factory to learn more, and appointing a non-working supervisor. “If you’re well informed, it’s worth the extra investment in time and money because you’re going to have a better product and develop a niche that you can be a leader in,” he says. “I think there will be glaziers that gravitate toward this and want to learn more because it is a skill and an art.”

The Ad Hoc Committee on Tall Wood Buildings, formed in 2016, was tasked with answering those questions. They studied materials from the wood, concrete and steel industries about the strength supporting ability of wood and its fire-resistance and concluded they just didn’t know enough about it, explains Thom Zaremba, partner at Roetzel & Andress and code consultant for the NGA and GICC.

Although generally cost-prohibitive and therefore quite unusual, says Zaremba, industry dollars supported the building of a full-scale, two-story apartment mock-up made entirely of cross-laminated timber. Then they burned it down.

“They learned some very important things,” he says. “There were no collapses, no structural failures and the fire was contained within compartments.” When CLT is set on fire, the exterior layer burns and completely covers the inner core of the timber in char. “Once it chars, it no longer burns. Char is not flammable and you can’t ignite it, so it basically puts the fire out,” explains Zaremba.

This test yielded clear data about how thick CLT must be to achieve 20-minute, 30-minute, 1-hour, 2-hour and 3-hour fire-resistance ratings. It also allowed professionals to look at how thick the CLT is and calculate how much structural support is still virgin unburned wood. “That tells them how thick the CLTs need to be on the first, second, all the way up to the 18th story, to continue supporting it even if they get burnt and charred,” Zaremba says.

With the new information in hand, the ad hoc committee submitted dozens of proposals, which the ICC reviewed and adopted to ultimately include in its 2021 version of the International Building Code. It will permit structures to be built up to 18 stories tall using only wood structural support.

Fire resistance was a leading concern, but not the only performance consideration under testing. A seismic shake table test of a 10-story, full-scale mass timber building aims to support the development of a seismic resilient lateral system for tall wood buildings, explained Keri Ryan, associate professor, civil engineering, University of Nevada Reno, during an FGIA webinar earlier this year.

Pei, also a member of the project team behind the shake table test, explains part of what makes this test unique is the industry collaboration to make everything as realistic as possible to what is likely to be designed and built after the IBC code takes effect. For example, all columns and beams will be built to fire code ratings, per the IBC code, despite not burning it, because beam size affects connection points.

The shake table itself is a 40- by 25-foot platform connected to hydraulic actuators that can replicate a specific ground motion, including horizontal, vertical and rotational motions.

“From the two-story test we did about two years ago, we’re pretty confident the structural system will remain damage-free,” Pei says. “But what we haven’t tested before and what typically is not tested that much in these large-scale shake table tests is nonstructural performance. The bottom line for this entire project is resilient space for seismic design.”

Ryan emphasized one of the important notions of resiliency is the ability of a building to quickly recover its function after an earthquake. The team specifically identified the building envelope as a priority nonstructural component because of the importance of the building envelope to safety and function. In fact, it is among the most vulnerable nonstructural components because it’s distributed vertically floor to floor and must accommodate inter-story drifts and accelerations, says Ryan.

The resulting test data, Pei explains, can quantify the performance of nonstructural components as they relate to functional recovery and resilience objectives. “We can try different designs in different parts of the buildings and stories and see what works and what doesn’t and get the subsequent research and development,” he says.

Among the most significant advantages of mass timber, Pei says, is the prefabrication aspect of it, which can reduce costs and improve quality.

“In many cases CLT are made to marry exacting specifications at the factory,” explains Zaremba. “They’re delivered to the site and put together like a jigsaw puzzle, which reduces the time necessary, labor necessary and cost of putting these buildings up.”
Its prefabricated nature also can reduce construction waste and can save 30 to 40 percent on construction build times, Katerra’s Milestone says.

Katerra offers mass timber as both a prefabricated, where the prefabricated parts are assembled onsite, and modular product, where parts are delivered to the site as modules and craned into place, dependent on the logistics of the actual build site, says Chester Weir, design lead in the office of the chief architect. “There’s a calculus involved between offsite modular manufacturing and onsite assembly, depending on the distance and logistics involved going from factory to site,” he explains.

Mass timber also provides an aesthetic appeal, which often translates to opportunities for more glazing, sources say. Glass gives the views outside when you’re in the building, but also exposes the wood structure inside of the building, says Zaremba. “More use of glass in the envelope, especially on the lower levels, is very likely,” he says.

Pei agrees, predicting more mass timber will be on the horizon, which is “good news” for the glass and window industry as whoever is building the structure likely will want to expose the wood. Although the up-front cost can be more expensive, Pei anticipates if production volume keeps increasing it could be on par with current construction methods. “Studies show it’s cost competitive,” he says.

“[Mass timber] has introduced a very significant competitor to concrete and steel,” says Zaremba. “Overall, fairly looking at all of the available options, it can be a very smart building choice.”

Further, Milestone and Weir anticipate the marriage of mass timber with steel and concrete for buildings, dictated by what the end user’s ultimate goal is. Weir cites Katerra’s integrated team as thinking holistically about buildings and opening their minds to hybrid approaches where building components are combined to facilitate timelines or allow certain materials to be used in ways that best play to their strengths.

Milestone says, “We’re looking at hybrid solutions where we’re putting the right material in the right place so our clients have more informed decisions on cost versus carbon in what they’re looking to achieve, whether it’s visual, biophilic or reducing the building’s energy cost in years to come.”